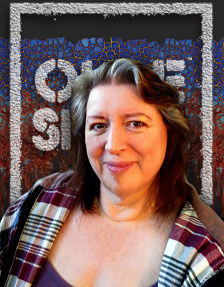 Hugo Award Winning Artist (2012), chosen as one of the game industry’s 100 most influential women.

Maurine Starkey is a lifelong artist impassioned by her deep interest in popular culture; from comic books, movies, and television to animation, theme parks, and science fiction. Her passion for puzzle solving brought her into the world of both traditional pen and paper role playing and computer games in the 70s and 80s. She became a founding member of Westwood Studios and established not only the look and feel of early Westwood games, but also set up their internal pipeline for art processing and delivery. She is considered one of the early pioneers in the computer game industry and listed as one of the one hundred most influential women in gaming by Edge Magazine.

Her skills and experience in establishing quality control for intellectual properties made her a valuable asset for companies such as Disney, Namco, Virgin Games, Endemol, and TSR, Inc. She has worked with large and small teams of artists and engineers.

Outside the game industry, she has been art director for companies specializing in high tech web research for DARPA contracts. For her work as an art instructor in Las Vegas, she received higher ratings than full-time instructors with MFAs (Master of Fine Arts). Her fine art has had many Gallery showings in San Jose, Los Angeles and Las Vegas.

Her current professional focus is on illustration as storytelling. She has been exploring avenues for making games a more immersive experience for the player. Her designs incorporate her years as a story teller to spark the imagination. Of course, not all her work has been to facilitate the needs of a creative team. She has also illustrated for various publications, including Casual Connect, Jim Baen’s Universe, and Marion Zimmer Bradley’s Fantasy magazine.

In both 2011 and 2012 Maurine was nominated for a Hugo Award, Science Fiction’s top honor. She won the Hugo in 2012 for Best Fan Artist in Chicago’s World Science Fiction convention. Additionally, she has worked on staff for the Game Developers Conference for ten years and has mentored a full generation of young game designers into the industry.