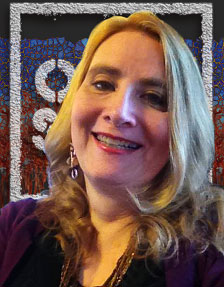 Jennell Jaquays is a gaming pioneer, a versatile game developer, author, and artist known for her extensive experience creating fun, enduring play spaces for generations of role playing and video gamers. A 30-plus year industry veteran, she pioneered the publication of pre-designed game adventures for early traditional role play games in the 70s. Several of her first adventures remain in print over 30 years later and still challenge and entertain new generations of role playing gamers.

As Director of Game Design at Coleco, the creators of the 8 bit ColecoVision game system and ADAM computers, she recruited, trained, managed and creatively guided one of the first multi-discipline video game art and design studios to produce more than 80 video game titles for Coleco’s own systems and competing game consoles. She and her team faithfully replicated and often improved upon the graphics and play action of the popular 80s coin-op arcade titles that Coleco licensed for the ColecoVision earning both critical and popular acclaim.

As an independent artist and designer in the late 80s and early 90s, she worked with game clients Interplay, Epyx, Electronic Arts, Prodigy, TSR, Inc. and others to create art and design content for games and high profile licensed properties like Lord of the Rings, Bards Tale, Dungeons & Dragons (D&D), Battle Tech, Star Wars, and Ghostbusters.

In 1997, Jennell returned to computer games full time to design gameplay levels for fast action shooters like Quake 2 and Quake 3 Arena at id Software (the creators of DOOM). As an artist for Microsoft/Ensemble Studios, she created 3D game settings for real time strategy games, including Age of Empires III on the PC and Halo Wars on the Xbox 360 console. Most recently, as Lead Level Designer for CCP North America, she led mixed discipline creative teams to block out the game worlds for their vampire-themed MMO, The World of Darkness.

Jennell is a frequent guest or speaker at game conferences, and in 2003 she had a major role in establishing the premiere game development degree program in the world, The Guildhall at SMU in Dallas, becoming one of the school’s first Guildmasters or industry advisors.